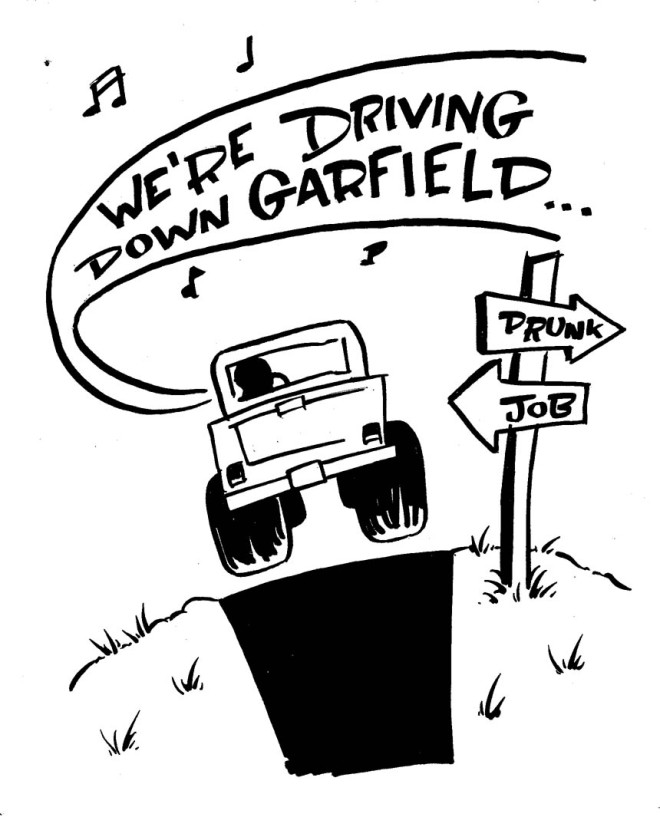 Illustration from Razorcake #58 by Brad Beshaw

So what was I doing there this second time? I’d met up in Hollywood with Jim Ruland, talked about books, picked up a couple of novels at Book Soup, then headed west to the freeway that would take me home. A woman in a very expensive car with a very expensive haircut tailgaited me, whipped around me, offered her middle finger for my viewing pleasure, then sped off. Her bumper sticker read, “I save lives, what do you do?”

I hadn’t really done anything to incur the wrath of her middle finger besides drive through Beverly Hills in my old pickup. I didn’t care about that woman or her finger anyway. Banner Pilot’s song “Skeleton Key” came on. I turned it up and sang along.

I like this song because it tells the story of the novel that the songwriter, Nick, wants to write. It opens with a woman who’s beaten down by the weather and a man who stumbles out of a bar. It’s a beautiful scene, but it’s all he has. He doesn’t know how it’ll all play out but he knows that, in the end, she’ll save him and herself. I love that idea of a novel that’s only an opening scene and an ending, no more than a hundred words spent on it. As I drove through Beverly Hills, singing along and thinking about novels, I thought, I could write that book for Nick. I know what it’s like to stumble out of bars and ally myself with beaten-down girls in a search for redemption. The song swears that it would have to take place in Minneapolis, but if I were to write it, it would have to take place in Cocoa Beach, Florida. Because that’s where I know about being lost like that. And thinking these thoughts, it occurred to me that I wrote this novel already. I called it Train Wreck Girl. It came out a couple of years ago on Manic D Press.

I kept thinking about Banner Pilot and books, though, because there’s something kinda literary about them. At the end of side A of their album Resignation Day, they sample a Jack Kerouac reading. This mirrors the sample of Kerouac at the end of side A on Jawbreaker’s 24-Hour Revenge Therapy. I like Banner Pilot’s sample better. Jawbreaker samples passages from Kerouac’s “October in the Railroad Earth.” Lonely, self-absorbed passages that match the lonely, self-absorbed songs of Jawbreaker: “the clarity of Cal to break your heart.” Banner Pilot samples passages from The Subterraneans, from the part of the book where everything goes right before everything goes wrong: “a tableful of beers a few that is and all the gang’s cutting in and out… the booming drums, the high ceiling.” This sense of things going right before they go wrong is part of what I like about Banner Pilot’s songs. Though Nick writes the songs, they remind of the stories Banner Pilot bassist Nate used to write in his zine Pick Your Poison. Stories about working shitty jobs, getting drunk, going nowhere, not really knowing where to look to go, even. And, of course, there’s Kerouac to think about, with all of his stories about working shitty jobs, getting drunk, etc.

So there I was in Beverly Hills—a city where nothing of value is produced, a city known only for its spectacle of opulence—once again thinking about class in America, thinking about one more lost generation and where it all comes from and what it adds up to. I’ve been reading these stories and singing along to these songs for more than twenty years, for more than half of my life. I’ve been writing them for about as long. Between my two trips to Beverly Hills, I even went to Flagstaff for the book release of James Jay’s The Journeymen. It’s a book of poetry about working shitty jobs, getting drunk, etc. His reading could be nowhere else but in a bar. It was packed with people who lived the lives that James Jay put into poetry. It was one of those unique literary events where the crowd spent almost as much time laughing, hooting, and hollering as James Jay spent reading, one of those unique events where this kind of behavior is welcome. Even encouraged.

With all this in the last two weeks, I drove home among the rustle and roar of the L.A. freeways wondering what conclusions I could draw from more than twenty years of reading novels and listening to songs about working shitty jobs, getting drunk, etc. Here’s what I came up with.

The first question I asked was: what’s behind all these shitty jobs? Of course, there’s the system of neoliberal capitalism and all that, but I want to stay focused on a topic small enough for this column. One of the books I’ve read recently that can help answer this question is Iain Levison’s How to Rob an Armored Car. It tells the story of three guys—a manager at a Wal-Mart-type store, a cook in a corporate restaurant, and a dogwalker—who decide to enter into a life of crime. The emptiness and futility of the two corporate jobs are familiar to most Razorcake readers. What’s interesting about the book is the dogwalker because he has dipped his toes into the American dream. He has a bachelor’s degree, a wife, a child, a house with a mortgage, his own business, everything he’s supposed to have. It all feels empty and insufficient to him. As I read the book, it was easy for me to root for these guys. I hoped they would take the step of getting away from the TV and actually rob an armored car. Because a quick survey of their options showed that life in twenty-first-century America can be empty and meaningless and there can be reasons for throwing it all away. Not that I want to throw it all away. I don’t. I just want to understand why throwing it all away is understandable.

This is why the dogwalker was interesting to me. I recognize his relationship with money because, like him, most of my money is spent on getting by rather than on exciting purchases. I earn enough to pay my bills because I want a roof over my head and water in my pipes and electricity for the computer and record player and light at night. I don’t buy much beyond that. But most jobs are only worth the ridiculous hours and chronic humiliation if you make enough money to buy shit that makes you happy. And most shit that I could buy doesn’t make me happy. I get exhausted thinking about all the things I don’t want to buy and don’t even want in my house. Here’s a short list: a cell phone, a digital camera, a new car, a suburban house, insurance, bottled water, a diamond ring, any kind of jewelry, anything that’s advertised during a football game, a blackberry, a meal at a corporate restaurant, a soda, new shoes, furniture, window treatments, clothing with logos on it, disposable cleaning products, anything sold at any big box store, anything for sale at my local mall, or anything else, really, except for a new air-conditioning motor for my truck so I can go back to traveling the freeways of L.A. bourgy-style.

So, if you’re not someone who likes to buy the poorly-made, largely disposable goods that drive our economy, if you’re someone who has learned that the purchase of nearly every item gives you a brief jolt of happiness followed by at best empty clutter and at worst crippling debt, then your typical job is unsatisfying and you may as well work a job that covers only the bare minimum. Whether we’ve articulated it this way or not, I think a lot of us has recognized this. Hence, the second part of the familiar plot: getting drunk.

But this is a real problem. For so many of us, the punishments of society (anywhere from being broke and eating Top Ramen to being homeless or in jail or carrying a lot of debt) are real, but the rewards (a bluetooth, leather car seats) aren’t rewarding. I wouldn’t want a house in Beverly Hills even if I could afford it. My neighbors would be assholes. I prefer the junky who lives next door now. He may blast heavy metal so loudly that I have to leave my apartment until he’s done, but he’s not all bad. Sometimes he plays the Misfits.

Beyond leading us to getting drunk, this relationship with work and money also leads us to that feeling of being lost and not knowing where to go. There’s no real easy answers to this one. It’s not easy to find what you’re looking for when you’re not even sure what it is. I don’t want to offer platitudes like be true to yourself or find something you love and pursue it. Going from lost to found is difficult, and it’s different for everyone. You have to figure it out for yourself. One way to figure it out is to write stories or songs. Another way is to listen to these stories and songs and decide what works for you and what doesn’t.

For me, luckily I don’t feel so lost any more. I have a pretty good job. It may not be perfect. I may not make a huge salary, but I only work thirty-two weeks a year. When I am at work, I feel like I’m doing some good for society. When I’m not at work, I can do the things that make for a richer life: hang out with friends, spend time with family, write, surf, ride my bike or my skateboard, volunteer for causes I believe in. It’s not for everyone, but, for me, it’s not bad. It beats being a stressed out asshole flipping off people on Sunset Boulevard or robbing an armored car, anyway.

Author’s note: This is the twenty-second chapter to a collection of Razorcake columns I wrote.  It originally ran in Razorcake #58.  For more information about the collection, read this post. If you enjoy reading my Razorcake columns, please consider subscribing to the magazine.