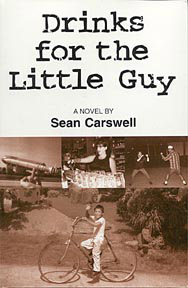 Drinks for the Little Guy is my first novel.  I wrote the bulk of it in 1994 while living in Atlanta and in 1995 while living in Flagstaff.  It was published in 1999 by Gorsky Press.

It’s been described as a cross between Steinbeck’s Tortilla Flat and Hunter Thompson’s Fear and Loathing in Las Vegas.  It’s my first attempt to say something about the working class of America. It tells the story of Chris Dunbar, a young carpenter from a small, coastal Florida town, who mysteriously disappears after he is visited by an unidentified stranger known only by his flowered shirt. In his absence, Chris’s friends examine his life and their own to solve the mystery of the disappearance and the stranger. From this point, the novel drifts somewhat away from Chris and moves to Merritt Island, the island of his birth and home to the Kennedy Space Center, towards Chris’s friends, “a gnarly bunch of obnoxious drunks.” The reader spends time with Swoboda, Chris’s cousin who is lost in a romanticized world where topless dancers are an amalgamation of sirens and angels; Sally, a hard-drinking, deep-thinking, part-time community college teacher; Mackey, a carpenter afraid of heights but willing, subconsciously at least, to tangle with alligators; Lester, a punk rock line cook; Alex, a county worker at war with the law; and Fat, the purest and sincerest drunk of them all.

Drinks for the Little Guy is currently out of print.

You can still purchase one of the last remaining copies at Amazon.

Here’s what some people said about it:

“No matter how I rant and rave, justice will not be done. Drinks for the Little Guy by Sean Carswell is, most simply put, wonderful… Carswell is a writer who seems set for a long career. I look forward to everything he writes in the future. And I highly recommend this book.”
—Gavin Gardner, Arizona Daily Sun