Gorsky Press has a page on Bandcamp that features several writers we like reading short stories.  Here’s a link to me reading a short story called “Big Books and Little Guitars.”  It’s part of a series of stories I’m writing about my favorite authors and their metaphysical ukuleles.  This one features Herman Melville.  Listen to it here.

I always like to learn about novel titles that were rejected.  One of the possible titles for Thomas Pynchon’s V. was Of a Fond Ghoul.  It’s absolutely the wrong title for that book, but a great title nonetheless.  With regard to Train Wreck Girl, I had a ton of titles.  The final one came very late.  At no point in the composition process did I have that title in mind.

As a way of adding a blooper sections to the novel, here’s a list of prospective titles with some commentary attached:

Crazy Broads and Dead People
In 2000, I wrote the draft of a novel with the same characters and same basic plot as Train Wreck Girl.  I called that novel Crazy Broads and Dead People.  For a number of reasons, the novel was as bad as its working title.  I finally gave up on the novel in 2003.  A couple of years later, I decided that the characters were good and I liked the basic plot, so I used them to write a new novel.  I started from a blank Word document and completely rewrote the book.  I didn’t reread the original manuscript.  I didn’t even dig it out of the box in the garage where it may have been (provided I hadn’t thrown it out in the intervening years).

Red Bus Right
There’s a story in Barney’s Crew called “Sid and the Dragon.”  The characters in the story surf at a spot they refer to as the “red bus right” because there’s a red bus on shore and the waves break to the right.  After the book came out, Jack Lopez said to me, “You should’ve called that book Red Bus Right.”  I agreed.  I wish Jack had said that to me before the book came out.  I would’ve changed the title.

This became the working title for Train Wreck Girl.

Toward the end of the novel, Danny dreams of surfing the red bus right.  I stuck it in there just so I could use the title.  It was a little too forced.  When Jennifer at Manic D asked me to scrap it, I was ready to.

The red bus right is actually a real place in Costa Rica, by the way.  My buddy Jimmy Koch and I surfed there several times on a trip we made in the late nineties.  Here’s a picture of it.

The End of Dude
I’ve already talked about this.  Women tend to hate this title.  I didn’t want to alienate women.

A Special Kind of Stupid
At one point in the novel, the main character’s brother refers to him as a special kind of stupid.  I got this from my father, who would sometimes refer to me as such when I was a kid.  He didn’t say this to be mean.  His point was that I was an intelligent kid, but I tended to stupid things.  And not just stupid things in general, but a very specific kind of stupid thing.  It was his way of trying to teach me to consider my mortality before engaging in extremely dangerous activities.

Danny in Train Wreck Girl is a different kind of stupid, but his stupidity is likewise specific.  All of his mistakes are a result of the exact same flaw in his ideology.  The title seemed to sum up what he was wrestling with.

I knew I couldn’t go with this title because it’s a way of giving book reviewers a weapon.  There’s no way to title a book A Special Kind of Stupid without a book reviewer somewhere using the title as a club to bludgeon the book.

Twilight of the Idles
It’s a pun off Nietzsche’s Twilight of the Idols.  I was briefly and moderately amused by it.  In the end, though, I never really considered using a pun as a book title.

Darkness and Sweet
I pulled this phrase from a Jim Thompson short story.  When I was writing Train Wreck Girl, the mood of Jim Thompson’s and Chester Himes’s novels was always in the back of my mind.  I wanted to do something as an homage to them.  I don’t remember why this title fell.  It just wasn’t catchy enough, I guess.

Beyond these, there was a long list of titles that I bandied about but never genuinely considered.  There are many puns, many variations using words like barnacle and knucklehead, and many embarrassing ideas.  I’ve listed them below.  I’ll blush and feel a little ashamed every time you read them.

The Break Up of the Monkey Duo

The Way of the Knucklehead

The Ingenious Gentleman of Cocoa Beach

Love and Death and the American Knucklehead

The Evils of Betty Boop

Make a Monkey out of Me

Too Late to Die Young

Love and Death and the American Asshole

The Way of the Barnacle

Surf in the Hurricane

A Crazy Swamp in the Atlantic

Love and Death in a Surf Ghetto

This Only Gets Better

Waste It All on Me

The Face that Launched a Dozen Greyhounds

Alive for a While

Love and Death and the American Numbskull

The Droids You’re Looking For

While the Getting’s Good

A Drunken Barnacle and the Exquisite Corpse

The Knucklehead and the Exquisite Corpse

Where the Waves Break

Titles of novels are always difficult propositions.  Books are often selected on their titles alone.  The dream, for me at least, is to come up with a title that is so compelling it becomes a part of the lexicon: something like Catch-22.  The reality for me is that I sometimes publish books with lame titles like Barney’s Crew.  Somewhere in between those two is Train Wreck Girl.

The first thing Jennifer Joseph at Manic D Press told me when she accepted the novel for publication was, “You have to change the title.”

The title, at the time, was Red Bus Right.

I was out surfing when I c 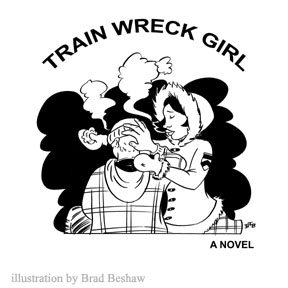 ame up with the title.  I’d been listening to Joe Strummer and the Mescaleros’ last album and the song “Coma Girl” was stuck in my head.  As I bobbed in the ocean between sets, I thought to myself, “Coma Girl” would be a great title for a book.  I didn’t have any girls in the book who lapsed into a coma.  I did have a girl who got hit by a train.  Hence the title Train Wreck Girl.

I was hesitant to use that title because I hate when people call ordinary, everyday spectacles “train wrecks.”  In particular, when the book came out, mainstream media frequently referred to pop stars or reality stars or movie stars with addictions as “train wrecks.”  It bugged me because train wrecks are genuine spectacles.  They almost never happen.  I’ve never seen one and I don’t know of anyone who has.  If I ever come across a train wreck, I’m going to gawk at that like no one’s business.

The point being, train wrecks are very rare.  Moderately famous people who flash their privates at paparazzi or get a DUI are very common.  Gawking at them is more of a car wreck.  That shit happens all the time and it’s not very interesting.

So I was hesitant to use a title that people might associate with Britney Spears or Lindsey Lohan.  My wife loved the title, though, and insisted I send it to my publisher.  I wrote a long list of titles and stuck Train Wreck Girl in the middle of the list.  Jennifer said, “That’s the one.”

The title I was pushing for—I put it at the top of the list and even suggested it again when Jennifer selected Train Wreck Girl—was The End of Dude.

My wife said, “I wouldn’t read a book called that.”

Jennifer said the same thing.  As did every woman I told the title to.

Sometimes, writers have to know when to compromise.  In the end, I’m sure it was the right decision.