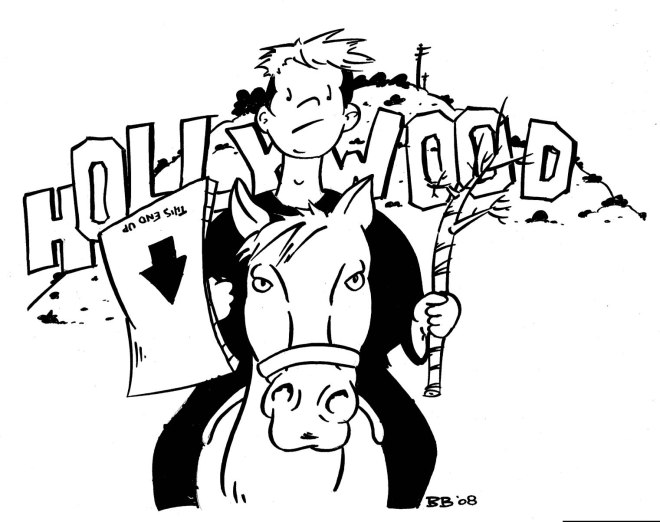 Illustration from Razorcake #46 by Brad Beshaw

I read Don Quixote as I gear up for my Hollywood moment: a lunch meeting with an actor and a director to discuss a screenplay that I have written. Since this is a Hollywood moment, I guess I’m not meeting for lunch or getting ready to eat lunch, I’m “doing” lunch. And what had brings me to this parking lot outside of a French deli (really? A French deli?); what has led me to write, of all quixotic things, a screenplay? All of that will have to wait for a while. In the meantime, Don Quixote has to charge into the Spanish plains to defeat the notorious Polish-Turkish-Egyptian army, who have cleverly disguised themselves as sheep.

Don Quixote is a misunderstood figure. He’s been simplified and mythologized in our cultural representations of him. We’ve come to forget the actual character that Cervantes wrote about. He’s kind of a Rip Van Winkle in the sense that, if you read Washington Irving’s story about Rip, you recognize that Rip was a drunk, a deadbeat dad, and a draft dodger who went on a twenty-year bender and made up a crazy story about sleeping for twenty years to cover his ass. But now Rip has turned into a Disney cartoon and a kid’s story and everyone wants to believe his silly alibi about sleeping in the woods for two decades. I like him better as a drunk. Don Quixote is the same way. We all know the story about him seeing windmills on the plain, mistaking them for giants, and charging them atop his swayback nag. The windmills, of course, win. We interpret this act as the all-too-human chase after crazy dreams. We anoint Don Quixote as the patron saint of lost causes and futile endeavors. Look at him: he thinks he’s a knight and there haven’t been knights for centuries; he made his face shield out of cardboard and his lance is just a crooked tree branch. He must be mad. What we forget, though, is that Miguel de Cervantes wrote about a different Don Quixote. In Cervantes’s novel, Don Quixote is not crazy. Not really.

This is as far as I get in the novel when the actor, Stu Smith, comes up beside my truck. I’ve known Stu since we were kids, since he moved into my neighborhood and instantly became the butt of two jokes. The first joke was about his dad, an aspiring stock broker who rode a moped. Sometimes we’d see him in the morning, us riding our bicycles to school, Stu’s dad, decked out in a suit and tie, riding his moped to the brokerage. Even the briefcase bungeed to the back of his moped was funny. The second joke was about Stu being Jewish. He was known around the neighborhood as Stu the Bufu Jew. I called him that, too, even though I was only ten and had no idea what a bufu was. To be honest, I didn’t even know what a Jew was.

Now when I see Stu, decades of memories float to the surface. Little moments long stored in the recesses of long term memory emerge. Like that time Stu and I were hanging out at a dull high school party and Stu formed a plan to make things better. I followed. We wandered a block away from the party and Stu uprooted a mailbox. I uprooted another. We switched the two out, then sallied on, pulling out mailboxes, swapping them with others, making sure that no house had the right mailbox in front of it for two blocks down Catalina Isles.

Of course it was ridiculous, but it was something to do.

And now Stu is an actor. You don’t know this, but you’ve seen him on TV. He’s one of the tens of thousands of faces you pass as you flip the channels. Sometimes, he’s painting his face and chanting, “Roughing the palate!” in a beer commercial, sometimes he’s flirting with Wanda Sykes in a sitcom, sometimes he’s in a robot costume on the Jimmy Kimmel Show or a banker on a drama destined for cancellation after four episodes or a burn victim or an angel or a golfer. Most of his roles are credited as either an occupation or a number: Heart and Lung Technician, Customer #2. I once rented the movie Rat Race, fast-forwarded until Stu popped onto the screen as a co-pilot, rewinded and watched Stu and the pilot bang heads about fifteen times, laughed like hell each time, then turned off the movie. That was two dollars well spent.

Stu is a big part of why I wrote the screenplay. In the screenplay, the main character is named Stu, nicknamed Stu the Bufu Jew, and he sometimes dresses in a suit and rides a moped.

In real life, Stu stands in front of me as I still have half of my head in Don Quixote and I can’t help wondering about Stu as an actor and me as a screenwriter, and thinking, which one of us is Don Quixote in this scenario? I’m the one living in my head when I write the screenplay. Stu is the one who’s hoping to act it all out, though in a socially acceptable way. Can we both be Don Quixotes? And, if there’s two people living out the delusion, doesn’t that go against the very notion of Quixote’s insanity? After all, the only difference between delusion and reality is corroboration. If Don Quixote’s squire, Sancho Panza, had seen giants on the Spanish plain instead of windmills, then Don Quixote wouldn’t have been delusional at all. He would have been a fallen hero.

And what about Sancho Panza, the squire? If he really believes that Quixote is mad, why does Sancho go along with him? Why does he leave his wife and child and ride out onto the Spanish plains with a man who believes himself to be knight, especially when you consider that Sancho knows he’s not going to get paid for all of his efforts? Is Sancho really as stupid as generations of readers have accused him of being?

Stu sees what I’ve been reading. He tells me that, after he acted in his first play, his parents gave him a gift. It was a matching set of Spanish statues, one of Don Quixote, the other of Sancho Panza. This information freaks me out a bit. I don’t say anything. We head to the deli.

The restaurant is perfect for people in the movie business in the sense that it focuses more on image than substance. A ham sandwich is called “jambon de Paris,” a salami sandwich is a “saucisson.” We meet up with the director and he’s a Hollywood insider in the sense that he makes a living off of movies. He’s written several screenplays that have turned into movies starring, well, big stars. He’s also a Hollywood outsider in the sense that he’s recently written and directed an independent film that features no stars, that he funded himself, and that he’s been showing at film festivals all around the country. He’s got a few suggestions for revisions on the screenplay, little things that he knows from making movies and I don’t know because I’ve only written novels, short stories, Razorcake columns, and that type of thing. Overall, though, he likes the screenplay. He likes it enough to offers to direct the movie, even though he knows there’s no money in it and he’s just turned down an offer to direct a movie for the Lifetime network. When the director makes this offer, I look at Stu. It suddenly becomes clear to me which one of us is which.

Maybe I imagine it, but I think I see the flashes of thoughts in Stu’s eyes. Maybe he can actually make this movie. Maybe he knows people who can fund it. Maybe he can actually be the star and not the guy laying on a stretcher, covered in burn-victim makeup. Maybe those aren’t really sheep on the Spanish plain. Maybe he really is taking on the Polish-Turkish-Egyptian army. Maybe he could be a knight.

Before Don Quixote set out on his adventures, he was a hidalgo. Hidalgos were landed gentlemen who, in the early seventeenth century, had no real means of supporting themselves, but social conventions dictated that they could not work or earn money. So Don Quixote was both a member of the nobility and a victim of abject poverty. He was literally starving went he set forth on his first sally. Sancho Panza was socially and economically below Don Quixote. After they set out on their adventures, though, they managed to find big, free meals most nights. They flirted with attractive (and sometimes horribly unattractive) women and fought with rogues; they met interesting people and heard great stories. Insane, stupid, or not, they had a lot of fun. Even if most of their adventures left them battered and bruised, they still ended up leagues above the slow starvation that ate away at them when they stayed home.

When Stu started his acting career, he was coming off of a ten-year stint as a stock broker—a job that ate away at his stomach lining, that pushed him into middle age before he had time to reach his thirtieth birthday. When my first novel came out, I worked as a construction superintendent—a job that made me feel like I was starving even as my weight ballooned.

Now I watch the flickers of maybes in Stu’s eyes. I feel a little like Sancho, sitting on my mule, drinking my wine, not sure yet whether or not I’ll jump in and help out if Don Quixote starts to get his ass kicked again. I reminisce about writing the screenplay and about all the childhood memories it triggered and about how time has let me and Stu take some of the pain of adolescence and turn it into a comedy. I listen to the director tell these dazzling stories about the Hollywood only insiders see. I eat my glorified salami sandwich, and even that tastes pretty fucking good. And, at this point, it doesn’t matter to me whether the movie gets made or not. Insane, stupid, or not, it’s all been pretty fun, leagues above the slow starvation of doing nothing.

Author’s note: This is the fourteenth chapter to a collection of Razorcake columns I wrote.  It originally ran in Razorcake #46.  For more information about the collection, read this post.