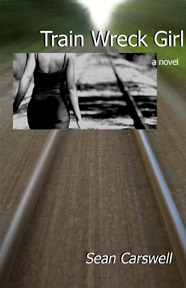 It’s a kind of coming-of-age story, but not in the traditional sense.  It seems to me that young men in contemporary America have a developmental stage when they move from being a dude to being a man.  This book is about that stage.  I wanted to title it The End of Dude, but everyone I pitched that title to told me it was ridiculous.

Here’s what the back cover of the book says:

After finding his girlfriend dead on the railroad tracks, Danny McGregor—Flagstaff bartender and surfer without an ocean—rides the next bus out of Arizona, fleeing to his Cocoa Beach, FL hometown, where a maelstrom of past ghosts await: his treacherous friend, Bart, finds Danny a job picking up corpses. Sophie, a former crazy girlfriend, wants to rekindle their relationship. Taylor, a twelve-year-old neighborhood girl, only wants Danny to teach her to surf. And then there’s Helen, with a face that launched a dozen Greyhounds. Through the chaos, Danny discovers his strengths amid all his weaknesses and is able to move forward while making peace with his past.

You can order it from Manic D Press here.

You can order it from Amazon here.

Here’s what some people said about it:

“Train Wreck Girl will easily be one of the best novels of 2008.”
—Caleb J. Ross, author of Charactered Pieces

“Filled with humor, suspense, and genuine philosophizing about what to do with one’s life, it read like a combination of Charles Bukowski and Jim Thompson. You know, a drunk being tossed into a film-noir, sort of like The Big Lebowski, except with not as many White Russians. A great read!”
—Wred Fright, author of The Pornographic Flabbergasted Emus

One thought on “Train Wreck Girl”